As part of our daily tasks at Karumi, our team has to audit Android or iOS applications. Most of the time the audit is requested by a client who needs to get more insight about the app state. But one Friday at the office, Sergio and I had an idea. What if we take a look and measure one of the "big" apps?. And that's exactly what we did. We picked up the Twitter Android app, rolled up our sleeves and started working on it.

This is the list of dashboards with the Twitter Android performance metrics we got during the study:

One of the key points we wanted to review was the app performance. The code quality is important, but that day we thought that reviewing the app performance could be more interesting. We were looking for answers to these questions: What is the app's frame rate? Is the CPU consumption high? What about the size of the internal storage? On the other hand, we'd like to share the results with you, sharing something interactive you could use and play around. How could achieve this goal? That's when an idea came to our mind... What if we could get a Twitter APK, inject some code inside, repackage the APK, install it into a device and collect all these performance metrics while using the app as a regular user?

For this performance review, we used a Sony Xperia D5803 device. A Quad-core 2.5 GHz phone with a 4.6" display. We decided to use this device because most of the Android users don't have the new shiny Google Pixel device. This model specs are quite common. The APK used during the performance review is the one with version name 6.25.0.

We used the app as any average user would do. Post some tweets, review my timeline, open some tweets, write some direct messages, create a moment, mark some tweets as favorite and leave the application in background for some time. We used the app during one hour, we only had to review the results at the end of the execution.

After reviewing the summary dashboard we realized that most of the metrics were almost perfect. The topics reviewed were:

This is a screenshot of the Android Home dashboard where you can see all this information: 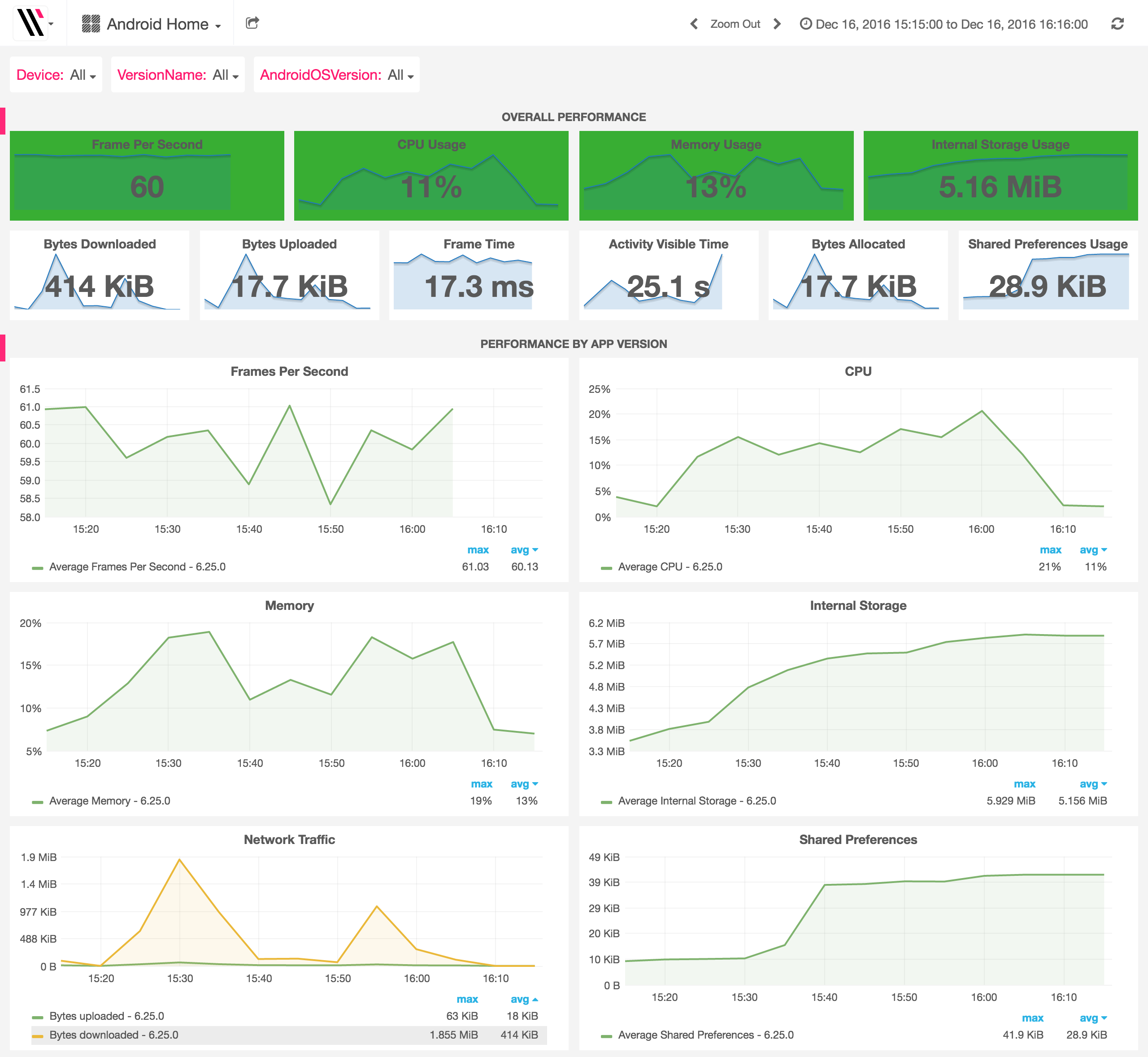 If you want to take a closer look and play with the dashboards you can open the following dashboards we've prepared for you:

If you take a closer look to the dashboards, you might notice some interesting details related to the app performance:

We spent a bunch of hours reviewing the app performance and at the end of the exercise we pondered whether we could improve the data and the analysis performed. Deploying a version of Twitter using this SDK we could get the same information but crossed by a lot of different metrics like device model, version of the app, Android OS version, number of cores, if the app is in background or foreground and much more. And if we had got access to the source code we could know more about the conclusions we faced before.

If you want to review other dashboards monitoring an Android Launcher implemented by the 47Deg team you can take a look here.

It was really interesting and fun reviewing the performance associated with such a great project as Twitter's Android app. We'd like to congratulate the whole Twitter Android team for such a great app. Maybe in a future blog post we could review any other app :).